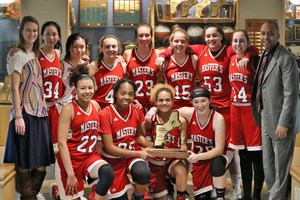 The 2017-18 basketball season was incredibly successful because the coaches encouraged our team to work hard and get what we deserved. Every single one of us on the team was pushed to be the best player that we could be. Although we had a new coach this year, Coach McIntosh, we were able to quickly adapt to his way of coaching and gave him the respect he deserved. This season was filled with wins, laughter, and built friendships.

In practices, we would run drills, set timed goals for the team, and focus on the areas we were weaker in. Our assistant coach, Coach Blomberg, would work with the post players and focus on their drives to the basket, while Coach McIntosh would work with the guards focus on our shooting. Our team was filled with positive energy and we celebrated each other’s successes both on and off the court. We encouraged each other through our mistakes as well, knowing that we were all working on improving as basketball players.

I had a phenomenal experience playing on the Girls Varsity Basketball team because we did not only grow as a team, but also as a family. Having a losing streak over the years was discouraging, but this year we really stepped up our game and were determined to win. With our determination and drive, we were able to go into every game with the mentality of winning, resulting in championships. I encourage the girls next year to continue on the winning streak that we have started. I love each and every one of my teammates and I think that The Master’s Girls Varsity Basketball team has a bright future ahead of them.