David Swanson began at CCSU and then transitioned to a full-time touring musician for 5 years before getting engaged. He then took a position as Worship Pastor at Calvary Fellowship where he began and is currently working on a Master of Theology from Gordon Conwell.

As Chaplain at The Master's School, David's experience has come from his roles in the local church. He has led worship for the last 15 years as well as small group ministries, leadership development, discipleship and local outreach. His roles in local church have also included teaching, preaching, Pastoral care, and counseling.

David has two sisters (one older, one younger) both of which attended Master's. He met his wife, Elisabeth, 17 years ago when he was a Junior at Master's and she was a Senior. They just celebrated their 10 year anniversary this past June. They have four children - Cash, Violet, Lydia and Annie.

The Master's School is a place that is very dear to David. It's where he was introduced to his wife, his best friend (still to this day), and to a God that cared for him personally. The teachers consistently poured into him as a young person and he is forever grateful for their investment. He wants to be that for the students he serves at The Master's School, whether in the Lower, Middle or Upper Schools.

Music is David's biggest passion and he runs a recording studio out of his home in Avon. Besides that, he loves spending time with his family doing whatever his kids are interested in at the time. A fun fact about David is that while he was playing in bands that traveled, he got to play 48 out of 50 states in the US as well as playing abroad in six different countries. 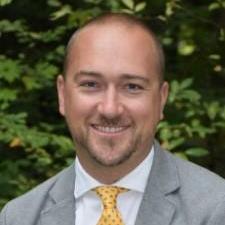