Mark is our Director of Upper School. He has been teaching Middle Schoolers for 7 years and recently began teaching High Schoolers. Mark earned his degree in Humanities and Afro-American Studies at Harvard University. He furthered his education with his Juris Doctorate (Law degree) and Masters in Education and Leadership.

Mark grew up in Hartford, CT with his mother and 3 sisters and later reunited with his youngest brother during his college years. Mark now lives in Bloomfield, CT and enjoys reading books and watching movies in his spare time. Mark decided to become a teacher in order to give back to his community and to be a mentor to his students and help them grow spiritually and academically. He chose to teach at The Master's School because of the Christ-centered community and teaching that takes place here.

A fun fact about Mark is that he was a practicing Buddhist while he was living in Colorado and South Dakota during his early twenties. 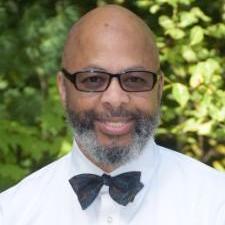